Each soul has a certain percentage of male energy and female energy, regardless of the gender of the physical body. For example, a man or a woman might have thirty-three percent male energy/sixty-seven percent female energy. The exact complement is a partner with a ratio of sixty-seven/thirty-three. All else being equal, you have more balancing sex with someone whose male/female energy ratio complements yours. Finding balance, of course, is very satisfying, but you might still be satisfied with a partner whose ratio does not balance yours.

Male energy is directed, focused, goal-oriented, productive, and outward-thrusting or positive-charged (as in a magnet). It corresponds with linear, left-brained thinking, and with doing. Its positive pole (as I channeled it) is exertion and penetration; its negative pole is intrusion. Female energy is creative, process-oriented, unstructured, and inward-drawing or negative-charged. It corresponds with circular, right-brained thinking, and with being. Its positive pole is expansion and generation; its negative pole is chaotic destruction. Female energy conditions the environment, whereas male energy structures it. The male body is designed to put male energy forward, and the female body is designed to put female energy forward, so there is a masculinity just from being in a male body, even when the soul is high in female energy, and vice versa. All else being equal, a man with seventy-five percent male energy is more focused and has more “drive” (not necessarily inappropriately) than a man with forty-five percent male energy, because there is more male energy there to put forward. Of course, the reverse is true regarding female energy and women.

Our male/female energy ratio remains constant from lifetime to lifetime. Although there are those who have a very high percentage of either male or female energy, most of my clients are fairly balanced in their male/female energy ratio, having no less than about thirty percent of each, making it easier to have a fairly complete experience of both sides of the creative process on earth. However, I’ve never run into anyone having precisely fifty percent of each. This suggests that our essence almost always likes to have at least a slight emphasis one way or another. Perhaps this is because a little imbalance promotes movement; a ratio of exactly fifty/fifty could create an internal stalemate. However, the universe itself contains a balance of male and female energies.

I sense a subtle “shift” when crossing the line from forty-nine/fifty-one to fifty-one/forty-nine. In other words, it is significant which energy is dominant, even if that dominance is slight in terms of percentage. This doesn’t imply, however, that if female energy is dominant, one is a female soul, or vice versa; the soul is without gender.

Male/female energy ratio has little to do with societal concepts about masculinity and femininity. Male energy is defined as how much of the soul's energy is goal-directed (focused in outer world productivity) and how much is process-oriented (more concerned with generating inner world atmosphere and possibility). A man can be masculine, in terms of how most Americans think of it, and have higher female energy--he will likely be more laid back and less career-oriented than if he had higher male energy. Warriors and kings are action-oriented by nature, so even a high female-energy warrior or king will need to be productive. It can hard to differentiate the focus of male energy and the action orientation of warriors and kings. Higher female energy suggests that the warrior or king will be more inclined to be productive in a lot of different directions, such as in puttering around the house, whereas higher male energy suggest more focus on one project in the outer world.

Warriors and kings have more trouble with their feminine sides, although they can be just as feminine as anyone else, in the true sense of the word--it just doesn't look like our society's picture of that, and if they are trying to conform to it unsuccessfully, they will reject it.

People with very high male energy tend to be workaholics, to the exclusion of the more internal and home aspects of life.

Having high male energy doesn't necessarily look like our culture's definition of masculinity. One can be gentle and sweet and have high male energy. In general, the expression and inspiration roles look more feminine, so a higher male energy priest might look less masculine than a higher female energy warrior, according to our societal stereotypes. Imprinting also plays a part in how someone looks. The ratio specifically applies to the extent to which one's energy is directed. There is a subtle feeling about these energies that you pick up after a while that is different from our stereotypes; for me, it is like an emanation from our center that is focused to a varying extent, like a piece of pie that can be narrow (more male energy) or wide (more female energy). Theoretically, total female energy is radiant in all directions at once, and total male energy is laser beam-like, completely focused, but we are all a blend of these two to some extent. Someone not being career oriented because he wanted time to write could still be validation of higher male energy if his true career was his writing, and he was focusing himself in that one direction when he could. He might be at home but directing his energies out of the home through his writing--his actions were not home-oriented.

Priests have a paradox, in that they are very powerful and concentrated in a fluid (feminine) way, yet our culture has assigned the concept of power to the masculine.

In a male body, the male energy is usually forward--the lessons are predominantly about male energy, no matter how much there is. Also, imprinting can affect how that manifests.

Many people are at least somewhat bisexual, and everyone can at least receive sensual pleasure from either gender; perhaps true bisexuality might be defined as the ability to be orgasmic with either sex. One Michael channel I trust got that 100% of females and 25% of males are bisexual, although I'm not sure how that was defined there. It depends partly on the role and male/female energy ratio of the soul and its past-life frequency of being either male or female, plus imprinting.

Shepherd has been channeling since 1986. He also does intuitive readings, mediumship, past-life regression, healing, counseling, and channeling coaching, where he teaches others to channel. He has conducted workshops on the Michael teachings throughout the United States. His other books include Enlightenment for Nitwits, Loving from Your Soul: Creating Powerful Relationships, Meditations for Self-Discovery, Opening to Healing, Growing Through Joy, Being in the World, and more to come.

Did You Enjoy This Article? Share It With Your Friends

Shop at the
New Age Store

The records generated of everything that happens in the universe as it occurs. The Akashic records are holographic and multi-dimensional.

Learn about other aspects of the teachings, including essence twins, task companions, cadres & entities, and more.

Role Photos: See What The Seven Roles Look Like

Photo Comparisons Of The Overleaves

Read Over 300 Questions Answered By Michael 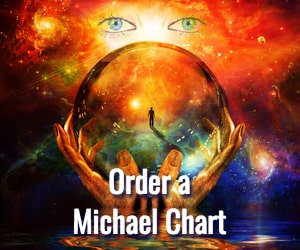